How to write content that engages on a deeply emotional level? 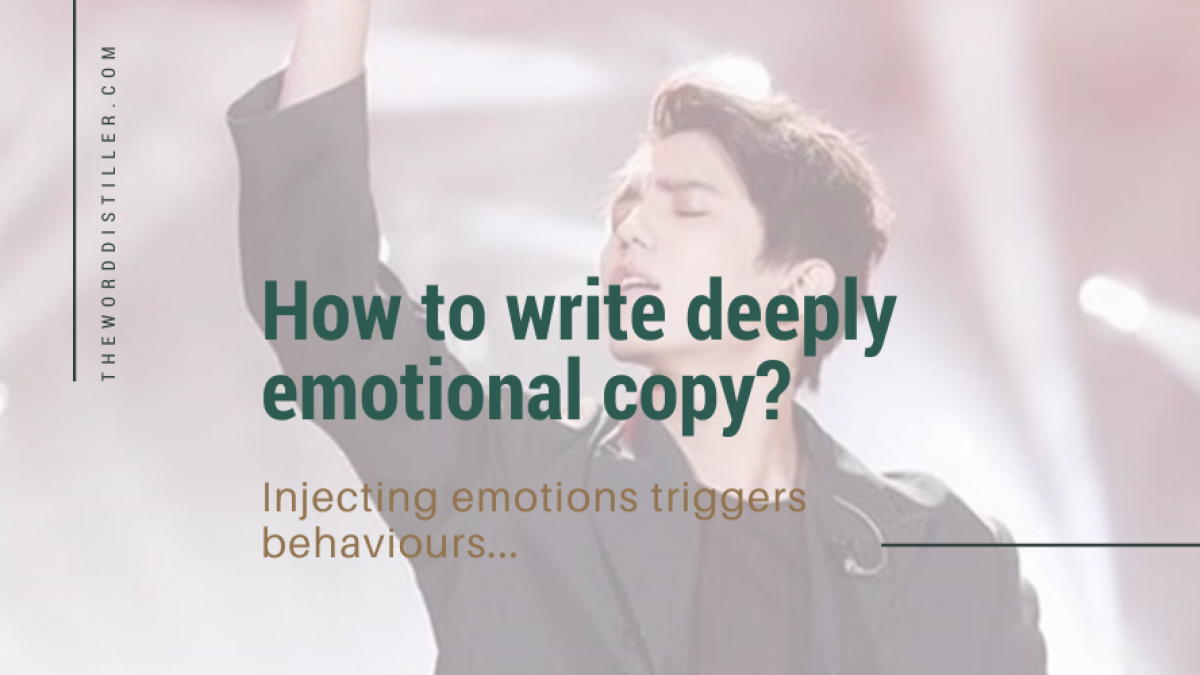 Emotions trigger behaviours. Injecting your writing with emotions is not too hard if you know how...

A few months ago I came across a young singer from Kazakhstan on YouTube. As a linguist, his name intrigued me as his surname sounds like it might have European roots. (Years back I spent some time in Kazakhstan teaching German to ethnic Germans and some German names can still be found.)

Listening to Dimash Kudaibergen sing, was a total revelation. I've listened to my first "Dimash song" countless times and I have listened to all his other songs that you can find online. I was captivated by the beauty of this song and wondered what it was that brought me to tears (and I'm not a very emotional person).

The song I is called "SOS d'un terrien en detresse" and it was recorded during a Chinese talent show. The recording shows lots of close-ups of the audience and captures the wonder, bliss, astonishment, and disbelief on their faces.

I was hooked because I see music as a form of emotional language and since copywriting is all about stirring emotions (with language), I wanted to figure out how Dimash is able to stir such strong emotions even though most of his listeners do not even understand the words he's singing.

So I started doing something I thought I'd never waste time on: I started watching reaction videos from voice coaches, opera singers, and all sorts of other "experts", only to find out how Dimash is able to touch the soul of everyone who's listening to him.

But how can we relate music to writing?

Here's what I think:

Growing up with music...

Dimash grew up in a musical family (both his parents and his grandparents are either musicians or in the musical industry) and Dimash was constantly surrounded by music.

It was natural consequence that he learned how to play instruments and started singing. And what's more - his "perfect pitch" was discovered as early as five years old.

We know proverbs like "the apple doesn't fall far from the tree" or "like father, like son". Growing up in an environment that provides access to music - or considering writing - access to books makes it a lot more likely to absorb and develop a love and passion for whatever your environment is passionate about.

And if you discover a special talent in that area, then you will likely enjoy practising music or writing and do a lot more of it. Our brains lead us to do just that because we repeat behaviour that brings instant gratification and positive feedback. We indulge in what we love and often don't even perceive the endless hours of practising music or reading and writing as hard work.

But we need to want it. We have to desire the practice. Otherwise, it becomes a chore.

Growing up in a family of readers and writers can certainly give you a jump start - which doesn't mean that you cannot develop the same proficiency if you start later. It is the passion, focus, and effort that makes you great and if you throw in a certain level of talent then you also have a chance at greatness.

Carol Dweck introduced the concept of a fixed and growth mindset. I'm not going into too much detail here because this article is not about mindset.

However, a growth mindset makes you crave infinite learning. It helps you to stay on track and work hard on what you want to achieve. It lets you understand that talents are just the starting point and that it is the hard work that makes the difference.

That's also what many of the experts pointed out when I watched Dimash reactions. They confirmed that Dimash is certainly talented but that it is the thousands of hours of practice that he's put into his music that have made him the extraordinary singer that he is. He's got exceptional control over his voice and every modulation of it.

I haven't been able to find the slightest wobble in any of his performances. His performances are perfect. And I believe that his mindset is able to deal with setbacks because they spur him on to get even better - next time.

And that's exactly how we need to embrace our writing. We need to write regularly and as much as we can even if our posts are not getting the engagement we want, or sign with a publisher the first time we send in a script.

We need to keep going until we are able to create something that moves others.

And just on the side: I heard that J.K. Rowling was rejected 12 times before she signed with a publisher...

Dimash has learned his basics since he was five years old. Now he's 25 and he's still studying. He's completed a Broadway Musical Masterclass, he's graduated in Classical Music, studied contemporary music and is currently taking his Masters in Composing.

He rejected a contract with an opera house and preferred to work on his personal style which brings together classical and contemporary singing.

What I want to say is, that you need to master the basics before you go off on a tangent because then you can get all the facets right - the techniques, drama, style, composition... - and you can create something beautiful and new, your own interpretation of something that's been done before.

Dimash sings covers of many songs but he always makes the songs his own. Check out his version of Lionel Richie's "Hello" and you know what I mean.

When you write, probably most of what you write has been written about before. But you can make an idea your own, make your delivery your own, interpret it your way, add your twist, and create something new.

Knowing the basics allows you to consciously explore new options and compositions.

Christopher Booker wrote that there are seven classical story plots and every single story is based on one of them:

But it is the variations and imagination that authors infuse into these story plots that make us watch movies, read books, listen to stories...

The entertainment industry is said to be the largest industry in the world and we continue to spend endless sums of money on it just to dive into the variations of just seven classical story plots.

I strongly believe that knowing at least some literary and writing theory makes you a better writer. And I believe that learning as much as you can from other disciplines allows you to create something unique and very personal.

And here's where I close the loop:

If you want to engage your audience and transport them into your world (without them even noticing that their attention has been hijacked) then you need to engage them on a deeply emotional (and subconscious) level.

You need to give them what they crave, care enough that you give them the quality they deserve, and transform them by giving them a piece of knowledge that will stay with them forever.

But you have to know what you are doing and that requires a certain stage of mastery won through exposure (to your art), tenacity and the right mindset, as well as the theory to deliberately use the techniques and tools that you have learned.

And lastly, you need to have the courage to make things your own and add your personality, creativity and thoughts.